The California Lieutenant Governor paid a rare visit to Garberville, the center of life in southern Humboldt County, on Friday to perform an even rarer act: to listen to cannabis growers, hash makers, confectioners and other workers in the marijuana industry talking about what kind of legalized recreational marketplace would work for them.

And it appears that Lieutenant Governor Gavin Newsom, U.S. Representative Jared Huffman (D-San Rafael), the Humboldt County Sheriff and other decision makers — some of whom sit on the same American Civil Liberties Union panel as Newsom — will presenting draft recommendations for a 2016 legalization initiative in 60 days – indeed listened to a room full of pot growers and listened to their concerns.

That alone, a give and take that was unthinkable less than 20 years ago is remarkable. For example, Newsom spent the morning before the packed meeting in a Garberville auditorium touring a local cannabis farm, asking questions and listening to growers’ opinions.

The encounter was a big deal in the Emerald Triangle. Beforehand, industry players took to social media to boost attendance. And it worked: A crowd of more than 200 people — including representatives from Aficionado Seeds, the Emerald Growers Association, California Cannabis Voice, and many, many more operations large and small — filled the Redwood Playhouse in Garberville for a chance to make their peace for themselves. the decision makers.

To say that the former mayor of San Francisco has charmed the public is an understatement. His star power was palpable. Even the other elected officials who were present to meet the growers admitted as such. “This is like following Moses,” someone said.

So what did Moses have to offer? Other than declaring the medical marijuana system in California “broken” and reiterating what most already know — that lawmakers in Sacramento are still unwilling or unable to address this issue after nearly 20 years — Newsom didn’t have much to say. more than a listening ear.

Pretty sure these guys are the man! Thanks for listening to us… #gavinnewsom

Newsom, Huffman, Humboldt County Sheriff Mike Downey and others dutifully listened to growers’ concerns: that licensing under a new recreational system should not be too expensive, that growers or sellers marketing cannabis need legal protection, that small family farms in the Emerald Triangle should be involved in every legal cannabis market.

Both good ideas and concerns came from the cannabis industry. The extraordinary hash-maker Frenchy Cannoli recommended introducing a regional certification system similar to the way France has categorized and certified wine. Another speaker noted that the word “Humboldt” is synonymous with top quality cannabis after all – so why not take advantage of it?

These are all good ideas. And right now, Newsom and his ACLU panel are taking it all to heart. Within 60 days, the panel will make draft recommendations to all parties wishing to draft a voting initiative for next year.

In the meantime, the Sacramento legislature is still grappling with the multibillion-dollar medical marijuana industry… something that lawmakers to date seem unable or unwilling to deal with.

“We have a problem,” said Humboldt County Sheriff Mike Downey. “We have a legislator who doesn’t want to get involved in this issue. We have a paralyzed approach to this.”

How far apart the legislators and the previously lawless growers are was clear. Huffman and Downey both took lumps for using the word “marijuana.” They apologized for it and switched to “cannabis,” but cautioned: In the government halls in Sacramento, no one knows what “cannabis” is.

That could be a problem. But whatever it’s called, there was one overpowering feeling.

“Please keep Humboldt green,” the crowd said. “We don’t want our livelihood stolen from us.” 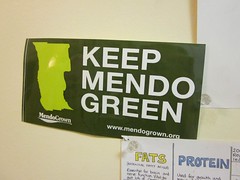